Penelope Wilton stars as a writer who finds her new neighbour isn't all he seems to be...

It's said that no experience is wasted on a writer, and it was a real-life incident that inspired this week's new ITV1 drama, Falling, starring Penelope Wilton and Michael Kitchen.

After appearing on radio 4's Desert Island Discs (for the second time), novelist Elizabeth Jane Howard received a note from a man who said that he'd enjoyed listening to her on the programme and that he'd like to take her out to tea one day.

'Then I got another note saying that he loved me,' says Elizabeth. 'I wrote back to say that this was nonsense and that he didn't know me at all. But I made a novel out of it.'

In Falling, Daisy Langrish, a writer, buys a Yorkshire cottage to use as a bolt hole from her hectic London life. Her new neighbour, Henry Kent, quickly calls round to help her settle in, and is so keen to get to know Daisy better that he avidly reads all of her books.

When Daisy moves in to the cottage to convalesce after an accident in London, however, she begins to feel that the intrusive Henry is starting to take over her life. But at the cottage Daisy has another mishap, one which leaves her in need of Henry's help more than ever.

'A love affair starts,' says Penelope Wilton, who plays the twice-divorced Daisy, 'but I won't say any more because it rather spoils the story!'

Penelope, 58, starred in the 2003 hit film Calendar Girls, about members of a Women's Institute who pose nude for a charity calendar. But she's perhaps still best known for her role as Ann Bryce, the wife of awful Martin (Richard Briers) in the Eighties sitcom, Ever Decreasing Circles.

Last year, Penelope was awarded the OBE for services to drama, and she's as busy as ever. She's appearing in two new movies, a Woody Allen film called Match Point, with Scarlett Johansson, and a big screen version of Pride and Prejudice with Keira Knightley.

'I always wanted to act,' reveals Penelope, who has been married to actors Daniel Massey and Ian Holm. 'I can remember being taken to the theatre when I was a child and thinking, "I don't want to be sat here, I want to be up there!"' 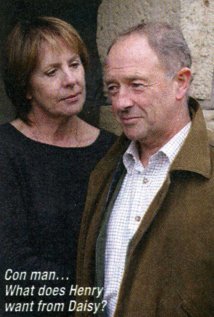